Should dogs be Vegan - Veganuary

Should Dogs be Vegan?

Veganism is an ever-growing movement and, as such, more conversations around various aspects of veganism are becoming commonplace. One such discussion is around our pets – while it’s hard to imagine a world without them, there is no getting around the fact that pets can add considerably to the carbon footprint of our households – especially when it comes to their diets. The topic of plant-based pet food is a divisive but important one. Buckle in for a long read – this is far from a black and white issue, so we couldn’t and wouldn’t want to cover this topic without giving it the attention it deserves!

What is Veganism?
Veganism is not simply a diet – it is an ethical framework that involves an individual avoiding any and all forms of animal exploitation. It encompasses not only avoiding animal products in food but also materials such as leather and wool, animal tested products and any other activities or products which involve the exploitation of animals.
The Vegan Society gives us the following definition:
“Veganism is a philosophy and way of living which seeks to exclude – as far as is possible and practicable – all forms of exploitation of, and cruelty to, animals for food, clothing or any other purpose; and by extension, promotes the development and use of animal-free alternatives for the benefit of the animals, humans and the environment. In dietary terms it denotes the practice of dispensing with all products derived wholly or partly from animals.”

Why are people considering feeding their dogs a vegan diet?
Veganism is an animal rights movement which acknowledges the sentience and rights of ALL species of animals. In the same way that vegans do not feel they have a right to expect other animals to be exploited and killed for their own benefit, the idea of feeding animal products to companion animals is seen as another form of “speciesism” (arbitrarily valuing one species of animal more greatly than another).
While the driving force behind veganism is animal rights, many vegans are also driven at least in part by their desire to care for the planet and tackle climate change. It is now common knowledge that animal agriculture is a major contributor of greenhouse gases and cause of deforestation, uses huge amounts of water and even contributes to ocean acidification, among other environmental concerns.
With dog and cat food estimated to be responsible for annual carbon emissions up to the equivalent of driving 13.6 million cars for a year, it’s understandable that eco-conscious pet owners are looking for ways to reduce their pets’ carbon pawprint.

Can dogs be vegan?
The simple answer here is: no. As we’ve established, veganism is not simply a diet – it is a moral belief system. Dogs are not able to make an ethical choice to abstain from animal products, and it’s therefore not accurate to call a dog “vegan.” It is more accurate to talk about whether or not dogs can be safely fed a plant-based diet.
Some might feel this is a pedantic point to make, but I feel it is an important distinction to make as we discuss the pros and cons of a plant-based diet for dogs. What we feed our pets is an important husbandry decision that has a direct impact on their health and wellbeing. Vegans feel a moral responsibility to the planet and other animals as a collective, but it is important that our responsibility for the individual animals in our care right now is not forgotten in the pursuit of our ideals and that we don’t justify poor husbandry by projecting our ethics onto those animals.

What are dogs: carnivores or omnivores?
This is a hotly debated topic, especially when the issue of a plant-based diet is raised. We know that our dogs’ ancestor – the wolf – is an apex predator and, as such, a carnivore. It’s easy to assume that the same must be true of our pups. It’s clear to see at a glance, however, that dogs have changed a lot since they first approached the campfire and began their evolution alongside humans.
These changes are not limited to the dog’s physical appearance – studies have shown genetic adaptation of the dog following their split from the wolf, to better suit the high-starch diet typical of humans. Evidence shows that dogs underwent gene duplication to produce more amylase – the enzyme responsible for digesting starch – alongside humans, now having a comparable amount of these genes to us!
On the other hand, dogs still have many typical features of carnivores – they need to use taurine to produce bile acid, cannot produce vitamin D (an animal product) and require a dietary source of arginine – an amino acid – to maintain nitrogen levels.
One veterinary nutritionist has posited the term “adaptative carnivore” for the dog, as their nutritional needs land somewhere in between a true carnivore and an omnivore.

What is the perfect diet for a dog?
Dog nutrition itself is already a divisive and extensively debated topic – even without getting into the validity of a plant-based diet! This is because, as explained above, dogs are somewhat of a biological anomaly. In addition to not fitting neatly into either the “carnivore” or “omnivore” box, there is some evidence of variation between different breeds. For example, studies into the amylase genes required for starch digestion found evidence that some breeds produce more amylase in their saliva than others – and we don’t know exactly why. You may have seen breed-specific lines of dog food on sale in pet shops and there is significant anecdotal evidence showing trends between breeds regarding tolerance of different diets.

Can a plant-based diet be nutritionally complete for dogs?
The short answer to this question is: yes. Numerous commercial vegetarian diets for dogs have been formulated to meet the nutritional measurements required by law to be labelled as “complete” foods. However, it is generally considered the “gold standard” to carry out feeding trials – where animals are fed a certain food over an extended period of time while their health is regularly monitored – and very few companies producing vegan diets claim to have done this.
Some studies have shown evidence of concerning nutritional deficiencies in plant-based diets; however, these are older studies and it is reasonable to assume many modern vegetarian diets would be more nutritionally sound. More recent studies monitoring the health of dogs whose owners reported they have been fed a vegan diet for several years, have not found evidence of any significant deficiencies or links to clinical disease. However, as mentioned before, these studies do not meet the standard of “randomised controlled trials” which are considered the “cornerstone” of evidence-based medicine.

So, what’s better – plant-based or meat-based?
Having established that vegan diets can be nutritionally complete for dogs, the next question is what’s better for our dogs – plant- or meat-based? There is some evidence suggesting plant-based diets may be linked to an increase in coat quality, a reduction in food intolerance symptoms and other health benefits – meanwhile meat-based diets have previously been linked to numerous health issues and safety concerns with regards to cross-contamination and disease. However, both the studies indicating there may be benefits to a plant-based diet and those linking meat-based diets to health issues are similarly flawed and it is therefore difficult to draw any definitive conclusion from them.
I think it is worth noting, too, that many studies on meat-based dog foods have been carried out on commercial diets which use ingredients “not fit for human consumption.” Not only does this predictably result in lower-quality and less consistent ingredients, but it increases the risk of safety concerns such as cross-contamination of meat products. With a growing trend among pet owners to feed higher quality food to their pets, many of the highest quality meat-based dog foods now use ingredients which are fit for human consumption and more companies than ever are able to identify not only the species of animal but the specific parts of the animal used in their food.
While some anecdotal evidence suggests health benefits associated with plant-based diets, equally, evidence is growing regarding the potential benefits of raw meat diets for dogs – take the recent study of over 4,000 dogs which found a significant reduction in allergic and atopy related skin symptoms in adult dogs who were fed raw foods as puppies.

So, what’s the verdict?
Ultimately, evidence suggests that both a plant- and a meat-based diet can be nutritionally adequate for our dogs and neither can be definitively linked to any significant risk of health issues. What I feel these studies highlight more than anything, is the lack of transparency from many commercial food companies – for both plant and meat diets – regarding their quality control processes and the lack of rigorous feeding trials from many.
Ultimately, one of the best things owners can do for their pets is take the time to research the food they are feeding them and to contact food companies to enquire about their quality control procedures and how they ensure the consistency of their food’s nutritional values. More pressure from consumers will encourage companies to take more time to properly test the quality of their diets. Feeding multiple brands alongside one another or swapping brands every few months can help to safeguard against any potential nutritional deficiencies as they are likely to vary between diets (please note: any dietary changes should always be conducted gradually, please speak to your vet for guidance).
Eco-conscious pet owners will be pleased to see that a plant-based diet is a valid consideration when choosing a pet food but, hopefully, it is clear that there isn’t one categorical answer and that the science of nutrition is complex. It’s great that there are options out there for responsible pet owners who want to reduce their household’s carbon footprint, but it’s important to remember that our responsibility for the immediate welfare of animals in our care should always come first. Whatever you choose feed, working closely with your vet to regularly monitor your pet’s overall health and  being willing to make appropriate dietary changes based on the needs of the animal in front of you is the best way to make sure you are feeding your dog what is right for them. 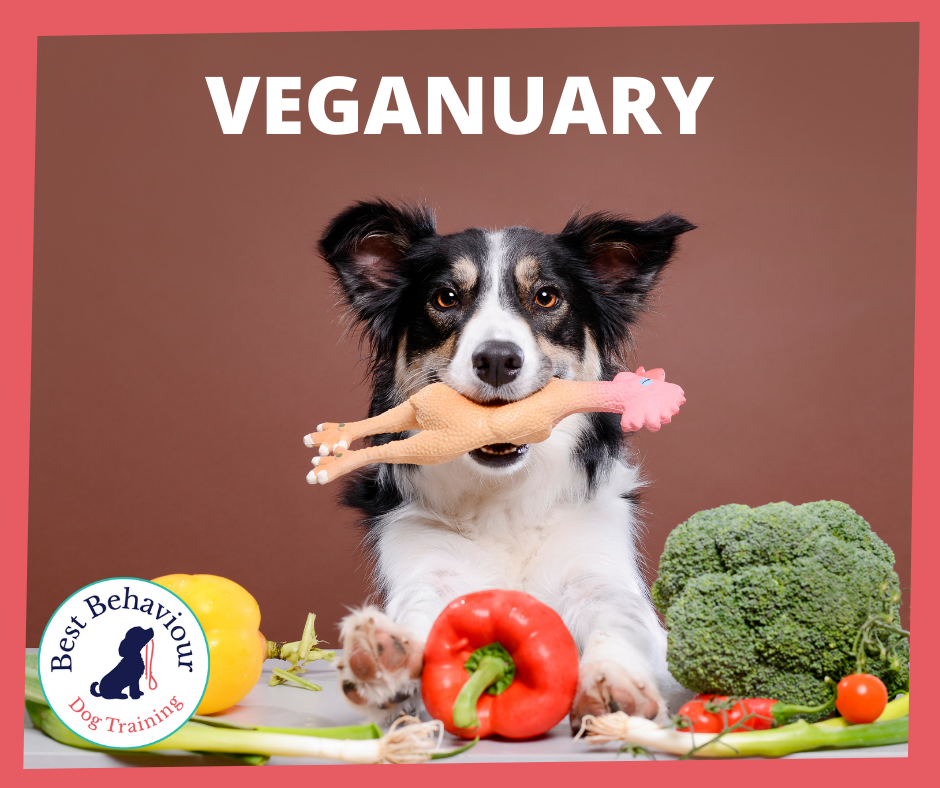