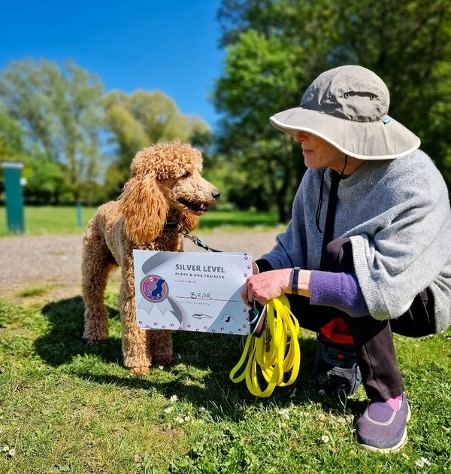 Bear came to Best Behaviour Dog Training as a young puppy to attend classes and work on...

Bear is an intelligent, fun dog with a huge personality. He has attended classes since he was a very tiny puppy and it has been such a delight to watch him grow into the handsome chap he is now! Training has been such an important part of ensuring Bear is now a happy, calm dog who knows how to behave appropriately.

Bear has attended Puppy & Dog Training classes at our venue in Martlesham since he was a small puppy. He has also attended our Pupability sessions at Kembroke Kennels and our Heelwork Like A Pro power hour at the Blue Cross! He has covered a range of different skills in class, including:

As a small puppy, Bear was absolutely full of energy and, being such a bright little dog, he needed something to do with it! Now he has grown (a little past his human's expectations!), he still has tonnes of energy - thankfully, he has plenty of appropriate outlets for it, too! From a bouncy pup who could sometimes lose focus and resort to jumping up and lead biting, Bear has matured into a wonderfully well-manner and handsome dog who loves to train!

Without his humans' proactive approach to his training and education, Bear could have easily become a troublesome teenager! Due to their dedication to his training, Bear has learnt many valuable life skills and is now a model student. He is able to be calm, engaged and responsive around people and dog - he even went on a trip from his rural Suffolk home to the busy streets of London recently and didn't put a paw wrong!

Bear has been so lucky to have ongoing, good socialisation in a controlled class environment ever since he was small and it's clear to see the benefits of this after seeing him trotting casually into class and getting straight into his training each week! As a highly intelligent dog, he has also benefitted hugely from the mental enrichment that training offers dogs and this has played a big role in him developing into such a happy, satisfied and well-rounded older dog.